What are the Benefits of Pixel Shift Technology?

Pixel Shift Technology is used to significantly extend an industrial camera’s resolution beyond that of its native resolution by nano-shifting the sensor a fraction of a pixel or what is commonly called subpixel rendering.   A full resolution image is captured and saved for each shift. Moving the sensor by a 1/2 pixel increment produces four images that are combined into an image with four times the resolution of the initial image, while a 1/3 pixel shift results in a composite image that is nine times the resolution of the original image. This makes the technology very useful for today’s demanding Ultra-High Resolution imaging and machine vision applications.

Developers can realize many cost and performance benefits across a range of industrial imaging applications by using Ultra-High Resolution cameras that incorporate Pixel Shift Technology.

Pixel Shift Technology is ideally suited for high-throughput automated optical inspection (AOI), and film and document scanning applications. Ultra-High Resolution Pixel Shift cameras can reliably and accurately inspect these large, highly-detailed parts. This is of critical importance to the electronics industry, where manufacturing errors result in enormous monetary and productivity losses. As new generations of PCB and flat panel displays increase in pixel densities, pixel shift cameras will continue to play a vital role in ensuring that inspection times do not increase while inspection quality is maintained.

An Ultra-High Resolution camera with Pixel Shift Technology allows an image to be enlarged without relying as much on the lens for magnification. This gives developers the flexibility of choosing a lens with a larger Field of View to obtain more information per frame and improve inspection rates. By increasing the Field of View, a developer captures the right amount of detail necessary for the application without having to stitch images from multiple, lower-resolution cameras.

The cost savings over a (3) sensor RGB camera is obvious.  Shown below is a series of images captured looking at a color display.  The top left is the native resolution.  The other images are pixel shift images with various levels of sub-pixel sampling. 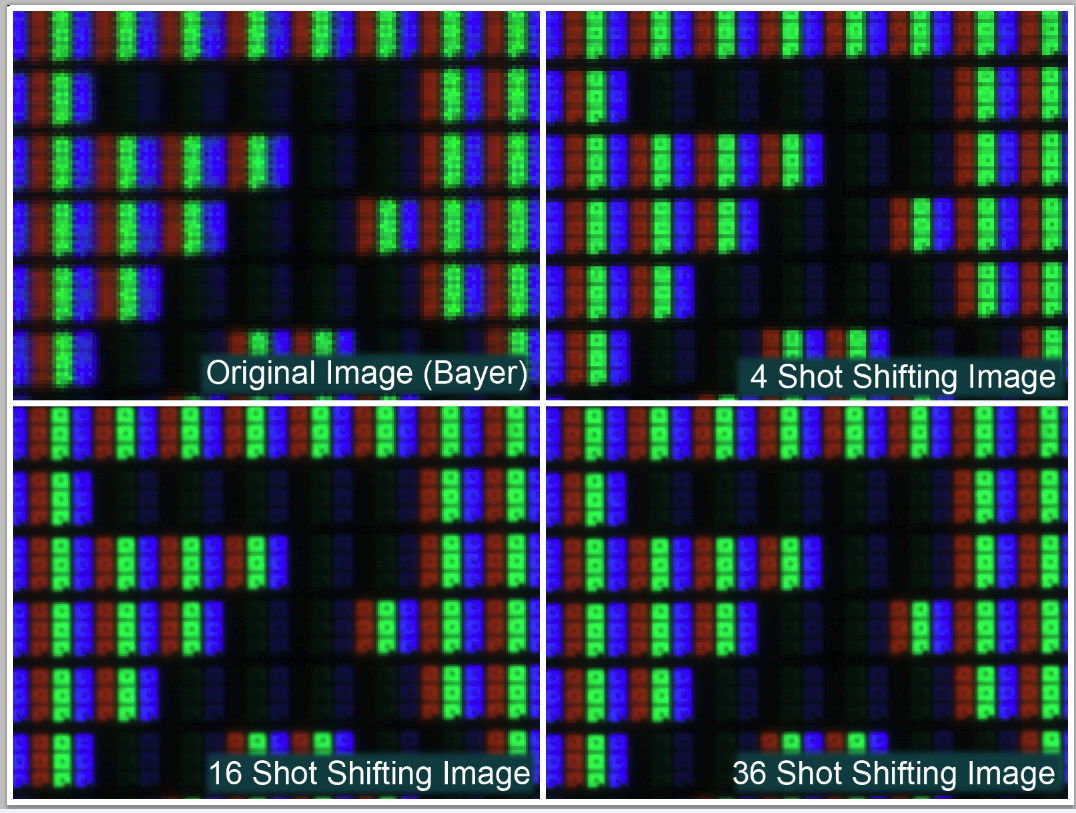 Another advantage is that the artifacts introduced by a sensor’s pixel fill factor such as moiré effect can be reduced when compared to the non-pixel shift image.   As an example, many interline CCDs have a fill factor of 60 or 70 percent.  Shown below is an explanation of which sub-pixel sampling can reduce the moiré effect.

Another key advantage is the cost savings using Pixel Shift Technology.   Savings as high as 80% in system cost has been realized as an actual example in replacing (9) 29MP cameras with (1) 29MP pixel shift camera.  Replacing multiple low-resolution cameras with one Ultra-High Resolution pixel shift camera eliminates the need for multiple lenses, cables, light sources, and interface cards, which saves costs. It’s much simpler to develop an inspection system using one Ultra-High Resolution camera than it is to create a multi-camera-based application that requires precision timing between cameras, lighting and various automation devices. A single pixel shift camera-based system is also much more reliable, and easier to calibrate and maintain than its multi-camera counterpart.

Vieworks has many pixel shift cameras.  The VN-25MX Pixel Shift camera was awarded the Platinum Level (only 3 given) in 2015 Vision Systems Design Innovators Award Program.  The VN-25MX camera can produce 100MP images at 18 FPS and 225MP images at 9 FPS!    Additional information on these outstanding pixel shift cameras can be found at Vision Systems Technology, the Northern American distributor for Vieworks cameras.  Please contact us at [email protected] or 858-449-1562.